skip to main | skip to sidebar

We'd been at L'Atmosphere for dinner and I had had a rather dubious crepe; some kind of processed liquid cheese combined with what appeared to be luncheon meat and a fried egg, French haute cuisine it was not but luckily my feline friends were on hand to help out and I launched chunks of ham, cheese and egg through the air to land on the grass where a series of moggies were patiently waiting for tid bits. Rangy little afghan cats, they knew where best to catch the crumbs and were delighted by the random lumps of fine fare that were raining down upon them, seemingly from the sky; "Thank you Sky Cat", I heard them saying to each other as another lump of ham appeared out of the darkness and landed at their paws. PM and I hypothesised about what it must be like to be a cat - or any other animal for that matter - interacting with humans and their stange ways. When a cat receives 'manna from heaven' does he believe that god is sending him food? At least if I didn't enjoy eating greasy tinned muck in a pancake the cats certainly did. 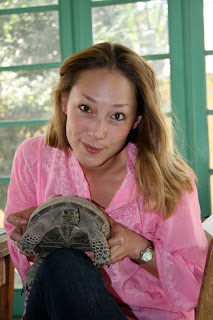 One afternoon I spied the tortoise in the garden and in my general enthusiasm whipped him up from the grass and brought him inside to have his picture taken. I had all but performed an alien abduction on him I thought as I pictured how it must feel to have big, pink hands descend upon you and suddenly levitate you effortlessly, transporting you up in to the sky. A large, gangly, alien being with no shell peering at you in the face and talking in strange tongues. A strange habitat filled with garish colours and patterns and machines with lights on that beep and whirr, some bright, bright flashes of light (no pain) and then suddenly, flying through the air again and landing, as if all was a dream, back on the grass, "White light, hazy memory. Roswell..., area 51... then nothing". Alien anal probe - my arse - that tortoise will have sold his story to the National Enquirer quicker than Elvis can down a burger on the toilet whilst flying a jumbo jet to the moon!
Posted by explorer kitten at 11:07 PM

explorer kitten
Kabul, Afghanistan
I'm a medical doctor, trained as a surgeon and want to share my thoughts on being in afghanistan whilst looking at the current shape and the future of healthcare in afghanistan. Explorer Kitten also wants to share her thoughts on the country, her adventures and what it's like to be here... :)